A Region Evolves with China 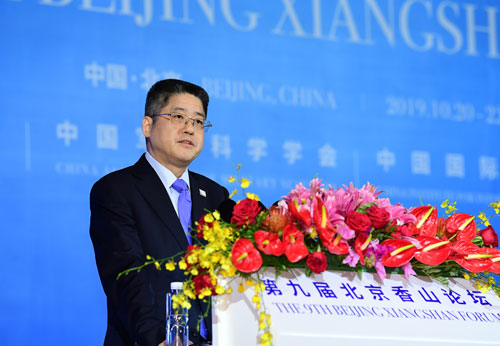 A Region Evolves with China

WHEN countries have difficulty relating to a rising China, part of the problem lies in not understanding where China is heading and not knowing what it will become.

The sheer scale of China’s development and the weight of its trajectory mean that the impact of its rise on the rest of Asia and the world is bound to be considerable and profound.

As a frame of reference, the future of today’s China is often seen in the context of its past: a “Middle Kingdom” entity, the heart of an Asian tributary system, a regional superpower with global pretensions whose once closed-door policy is opening to the world.

Yet none of these references fits because modern China’s pace of change is as rapid as it is vast. Not only is it a post-Deng China, it is now into the fourth-and fifth-generation leadership of post-Dengist society.

A sense of a likely future China may then be deduced through elimination, by discarding what it is unlikely to be.

These include a communist superpower, a nation shaped by a distinct ideology, and one led by a powerful charismatic individual. But what of those things, admittedly few, that it will still be?
One of these is rule by the Chinese Communist Party (CCP), particularly since single party rule continues to be a central bastion of the status quo. Yet even this requires qualification, if not some revision, and is already subject to much speculation.

The CCP has had to undergo some redefinition as circumstances evolve. The state socialism it championed underwent a social(ist) market phase to emerge as state capitalism.

Ideology continues to be diluted as dogma fritters away. Conservatives and reformists both within and outside China agree the trend is irreversible if not also inevitable.

Just about the only thing that a future China is still certain to be is a unitary state. But even this has to be qualified again.

What is now regarded as Greater China – the People’s Republic of China on the mainland, Hong Kong, Macao and Taiwan – are unlikely to be fused into one singularly cohesive whole anytime soon.

Yet they are moving together towards a unitary economy, the basis of the modern nation state. Such a trend is beyond the protestations of democrats and the comprehension of many strategists.

At the same time, provinces are slowly moving towards greater autonomy in economic matters, including in dealings with neighbouring countries. A country as large as China cannot endure too long under strict centralised rule.

And China has endured longer than all others, with the country now into its fifth millennium of continued statehood. These trends and movements take time and may seem imperceptible for other countries, but they are par for the course with China’s enormous timelines.

For decades now, Chinese authorities have also introduced elections at local levels with invited inputs from the Carter Center. Voting has been practised in village and provincial levels, and despite occasional fits and starts the trend is towards a controlled political opening with assured stability.

All of this contributes to the near-incomprehension of today’s China on the part of external observers. A survey of their attitudes, assumptions and responses in any given week attests to this reality.

Questions of whether China (meaning Beijing) can ever govern Taiwan, or even understand Hong Kong, are typical. The real risk of observers not seeing the wood for the trees is ever-present.
A debate of sorts has emerged over China’s likely reaction to a possible win by Taiwan’s Democratic Progressive Party (DPP) in next January’s election. Pessimists who fret over their own cynical pronouncements fail to realise that China is playing for bigger stakes than petty party feuding.

China’s interest in Taipei is Taiwan, not necessarily a Kuomintang (KMT) Taiwan. A lately declining KMT under President Ma Ying-jou has sufficiently energised pragmatists in Beijing to be diplomatic towards the DPP.

Another perennial issue is the presumed rivalry between the US and China. Although competition exists between them, they have more in common than at variance for now and the foreseeable future.
Their shared interests include international security and a single global economy in which both hold the largest stakes. Rivalry in these core areas compromises the interests of both without enlarging opportunities for either.

An understanding of that basic reality is shared between US and Chinese leaders, but apparently not by Japanese ones. The Abe administration is still stuck between old wartime anxieties and proudly snubbing Beijing.

However, China should also not expect anything but Abe’s cancellation of a visit on Sept 3. The occasion, with Western leaders absent, is being presented by some in China as celebrating its victory over Japan.

Nonetheless, the Abe government remains an activist one in provoking competition with China over military issues. Its White Paper released last month inflates China’s maritime military capabilities and even conflicts with US calculations.

Besides the US, Taiwan and Japan, the other barometer of China’s rise as seen through its foreign relations is Asean.

China regards Asean wariness of its territorial assertiveness as limited and negotiable, since not all member countries have rival claims to offshore territory. But Beijing may seriously be underestimating Asean’s sense of solidarity, given not just Asean’s community-building agenda but also its common resolve to develop community cohesiveness.

The established links between China and Asean’s newer CLMV members (Cambodia, Laos, Myanmar, Vietnam) are both limited and fraying in places. Beijing needs to rebuild trust and good faith within Asean as much as in North-East Asia.

China has thus emphasised multi-level, multi-sectoral joint ventures both bilaterally and collectively. Its proposals for a Maritime Silk Road and a One Belt, One Road link to Europe are backed by the

On the ground however, Asean collectively seeks enlarged trade volumes with China. However, China’s currency devaluations and the subsequent jolts to regional currencies compromise these goals.
With Indonesia, China is extending cooperation in fighting drug trafficking as Jakarta favours using the yuan for bilateral trade. With Malaysia, China is building linkages in education and industrial development.

Thailand’s post-coup government is seen as leaning towards China, thanks in part to a US snub. Now Thai-Chinese ties are growing over purchases of stockpiled Thai rice and even the prospect of a Kra Isthmus canal.

China’s relations with Vietnam and more so the Philippines will require more time and work. Ironically, Unctad trade data identifies the Philippine economy as the biggest regional beneficiary of China’s rise.

Beijing’s ties with the other Asean countries may be less complicated but still require attention and constant tending. Its record of fully understanding Asean is not impressive.

Overall, Beijing’s relations with Asean and its member nations are economic, diplomatic and socio­cultural, without political interference in their domestic matters. This contrasts with Washington’s largely military posturing and its political pressures on issues of democracy and human rights.

China’s impact on this region is likely to remain non-political and non-military – differing from US interaction. This asymmetry makes up much of South-East Asia’s strategic status quo.
Whether and how it will endure, and whether it deserves to remain, still have to be seen.

Article by Bun Nagara which appeared in The Star, 30 August 2015.